So, most of your Watch This Hockey team went out to experience women’s hockey out in nature last Friday! It was followed up by all of us coming down with a terrible cold which I will blame on staying out too late eating Victory Ice Cream and then taking the public transit home on a chilly October night.  

Alas, Elena was not able to join us, but Clair, our Mighty Intern, and our friend and Graphical Wizard, Bess joined us among others. Bess ended up taking over my camera, because I have lost the knack of following a hockey game while taking photographs of it. (We have a selection of the photos she took in a gallery at the end of this post– check them out! I think I’ll try to get Bess to photograph more games in the future.   )

First off, I’d like to touch on ticket prices. Gophers’ women’s games are FREE for U of MN students, of which we had two in our group. Group tickets (10+ tickets) are $4. Adult tickets are $8, student tickets are $5. We took 12 people to a REALLY EXCELLENT hockey game for $40. Guys, I don’t pay that little for a single 200 level drink rail Wild ticket any more. Not only that, but when two people didn’t show, I ended up selling those two tickets for MORE THAN THEIR FACE VALUE outside the arena. How often does that happen for women’s hockey?? Admittedly, the profit I made was 1/4th of a beer, but still. Pretty good.

So, back to the actual game. It was the second game in the Gopher’s season opening weekend, after an 8-0 win over Penn State on Friday night. Amanda Leveille started for the Gophers, after Sidney Peters got a shut out the night before against Penn State. Erin O’Neil (hilariously, a native of Minnesota, with an outline of the state on the back plate of her mask) started for Boston. 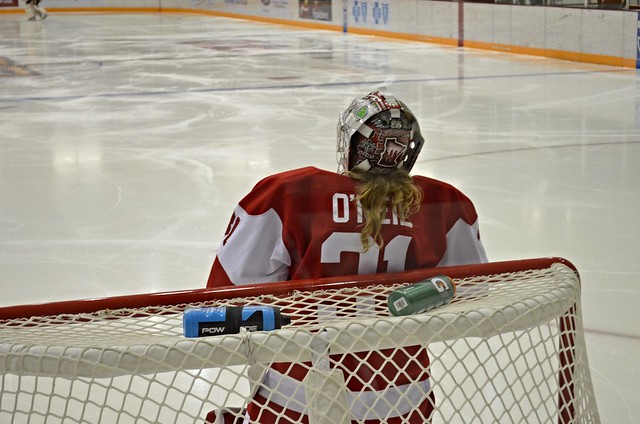 The first period was /rough/ for the Gophers. Leveille, who had started last season for the Gophers, looked super flaily as she made saves, and was often caught out of her net. She did get pushed around a good bit by BU, but it was not an inspiring performance at first. The Gophers in general did not look like a cohesive team– there were amazing flashes of individual talent, but the period was largely played in the Gopher’s end, although shots were even, and the Gophers lead in face-offs. Meghan Lorence scored the only goal of the period, assisted by Rachel Ramsey and Kate Schipper. (Rachel Ramsey, by the by, is INCREDIBLY TALL in person. Like, you don’t notice it that much on tape, and then she’s over half a foot taller than some of her teammates, and it really stands out in person.)

The Gopher’s lack of cohesion was really highlighted by the comparison to BU. It felt like every time a Gopher broke it out of their zone, they dumped it across the blue line and then went for a line change, while BU would tic-tack-toe it across the blue line, maintaining possession and keeping control of the puck.

The Gophers were playing a very physical game against BU, and the penalty shortly after their first goal pretty much killed a lot of the momentum from that goal. BU for their part were initially very much in the Gopher’s faces, with a lot of crashing the net. From the beginning, Poulin was very much marked by the Gophers, not surprisingly, but the attention seemed to stymie her– she only had four shots, no points– and it definitely aggravated some of her teammates. 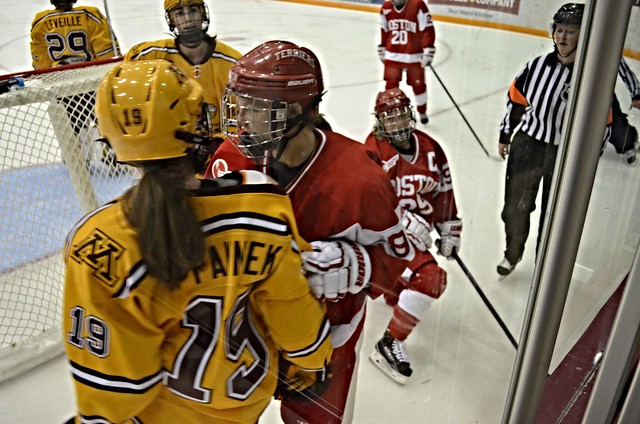 The general aggravation for both teams started to spill over in the second period, and things turned into a special teams battle. BU’s Rebecca Leslie scored early in the second, assisted by Maddie Elia and Rebecca Russo, at the same time as Minnesota picked up a penalty for hooking. About a minute into that penalty, Minnesota picked up another penalty. BU only managed to get two shots while on a 5 on 3 power play, both of which were blocked. Watching, it DEFINITELY didn’t feel like they were on a power play, much less a 5 on 3. In fact, seconds after they finished killing the penalty, Minnesota scored again– this time by Hannah Brandt, assisted by Brooke Garzone and Megan Wolfe. Shortly afterward, BU picked up a penalty, and then it felt like Minnesota’s offense really started clicking. Maybe it was having the extra man and having that extra moment to look and evaluate, but suddenly it felt like I was watching a really good team, and not just a handful of really good players– cliche, but true. The second period, it was solidly Minnesota’s game. Boston was much more retiring, and while still quite zippy as a team, they were much less in Minnesota’s face. This just solidified the feeling that Minnesota had all the time in the world when they had the puck

The third period, the energy dropped off a good bit, and things fell into a holding pattern. Not sure if it was just Minnesota protecting the lead (5-2) or if the four goals scored in the second period just took the wind out of Boston’s sails, but the engagement I had felt earlier in the game fell off a good bit in the third. Minnesota didn’t stop dumping the puck, and in fact, I think Boston did a much better job maintaining /possession/, but Minnesota’s high-end talent on the power-play and a lot of shot blocking really paid off for them in this game.