Tomorrow’s the big day! I hope @CoachFines is excited as we are for the 1st practice of the season! #thunderstruck pic.twitter.com/RTuBi72L7s

As the saying goes, “Those who can’t play, coach”… Soooo guess who made an extremely difficult decision and will be coaching this season. — Lex Hoff (@LexHoff) September 20, 2015

“The biggest thing that we’re looking for, what Dani (Rylan, league founder and commissioner) likes to say is: ‘we want to have 72 stars in this league,’” said the representative. “We want to have every player in this league be a big deal. The best way to do that is for everybody to know them and care about them and have information on them.”

“I knew I had to come here (to Western) to finish my fifth year of eligibility,” she said. Not that it was easy to walk away from the prospect of going pro. “Even though it’s not a lot of money… it was kind of hard to turn that down,” she said.

On top of the talented draft class, Jordanna Peroff, who was acquired Friday from Toronto where she won the 2014 Clarkson Cup, was back with several McGill teammates including Charline Labonte, team captain Cathy Chartrand, Ann-Sophie Bettez, Carly Hill, and others.

“As a team, we need to become stronger defensively and offer our goaltenders more support,” said General Manager, Rebecca Michael. “Up front, we need to start producing more throughout all four lines and not solely depending on our top players.”

“I’m pretty confident either way I’ll get a good amount of ice time, but definitely I’d like to play a little bit of a bigger role this year with a year of experience,” Szabados told The Canadian Press. “I’m a lot more confident going into this season with how I played last year.”

The Beauts don’t have as much veteran experience as the other NWHL teams, but look for the team to develop into one of the fastest and possibly one of the highest-scoring teams in the league.

“Janine is a big power forward, who has a great net-front presence and knack for scoring big goals,” [Rylan] said. “The New York Riveters are thrilled to welcome Janine to the team and we are excited to watch her game continue to grow.”

The NWHL founder and commissioner Dani Rylan, who also serves as New York Riveters GM, announced to media Thursday morning that the League had recently signed a contract for the Riveters with Aviator Sports and Events in Brooklyn, New York.

“My first choice was always to come back home to Quebec and have the opportunity to play for the Montreal Stars,” Poulin said in a statement. “The team has a great leadership core with so many skilled players, it would be an honour for me to join such an exceptional group.”

Ambrose has made herself into a boon both defensively and offensively to her team, coming in to her freshman year at Clarkson as one of the top defensive prospects in the country, and immediately becoming a top-two defender for the university. She scored six goals and 30 assists in her freshman year, winning the ECAC’s Rookie of the Year award and placing on the All-ECAC Second Team.

So, with the Clarkson Cup wrapping up recently (YAY BOSTON), there have been several people asking the question: why isn’t the NHL partnered with the CWHL? Why don’t they donate some money/time/etc to help grow the women’s game? And this has gained some momentum, sparking several articles and even a petition on Change.org.

That’s a pretty small selection of the articles and tweets that I’ve seen flying around. I’m not really sure yet where I stand on this, for a couple different reasons.

First is, I know there are a lot of new fans of women’s hockey/the CWHL this season, specifically drawn in by the Clarkson Cup, and they’re all running smack into the unfairness that is the current state of the league. (We did this too, when we started following the CWHL more closely!) But this conversation around the CWHL and the NHL has been going on for a while, and previous iterations of it is why we have the limited partnerships between the Stars and the Canadians, the Furies and the Maple Leafs, the Inferno and the Flames, etc. So, while it’s not an unimportant conversation to have, I’d like to see a little less ‘but WHY ISN’T ANYTHING BEING DONE’. Maybe the cry needs to be “MORE NEEDS TO BE DONE”, but there is a history here already, too. It can be hard to find as the news coverage of women’s hockey has traditionally waned and waxed with the Winter Olympics, however.

Secondly, I see a lot of aggressive moralizing around this topic. Which, yeah, the argument to be made about why the NHL should support the CWHL isn’t purely a financial one, although I believe there’s a financial argument to be made. But taking a scolding tone, attempting to shame people into becoming fans of a thing, that never works. You’ll get more fans by talking about how awesome a thing is, not how morally correct supporting it is.

Finally, and most annoying to me, most of the arguments I see for why the NHL should partner with the CWHL include as an often unspoken matter of fact that NHL hockey is the best hockey. Partnering with the NHL would provide the manly stamp of approval for the CWHL, as NHL hockey is the best hockey, and guys, I’m just not that into the CWHL needing the validation of a pretty flawed league with few stakes in their success. The CWHL is great hockey, full stop. It’s an entertaining experience, full stop. It doesn’t need the NHL to prove that. Yes, there are resources the NHL has that could help the CWHL– but the NHL is not the only source of those resources, and may not be the best one to provide that for the league’s future growth. Why am I not seeing more calls for a closer partnership with the Hockey Canada and USA Hockey a la the NWSL and the various soccer federations they have partnered with? We want to grow the game so it’s not just USA and Canada as the main event every four years, right? Why not work more with the non-North American hockey organizations to make the CWHL a place for their players to develop past college? It was Janine Weber, an Austrian player, who scored that OT goal for the Blades to win the Clarkson Cup, and she’s been a really solid contributor all season.

Gotta say, though, I love the idea of Stars v. Blades precursor to the NHL Winter Classic in Boston next year. 🙂

Myers’s piece is especially disingenuous because he treats men’s and women’s hockey like equal things when they’re not. Do you know why a men’s coach might have a different reaction to being fired than a women’s coach? Because those firings mean completely different things in those separate worlds.

[I] realized that, outside of TV sideline reporters, I couldn’t name one prominent female sports journalist other than Sally Jenkins of The Washington Post (who has been profiled in Quill’s “Ten” feature). Is it a pipeline problem? Are women really not interested in going into this field? Is the field inhospitable now, in 2015?

A couple nice videos to send you on your way after wading through all that sexism stuff!

Check out Bye Dietz’ acceptance speech– she mentions the fact that in 9th grade, her dad counseled her against continuing to play hockey because he didn’t think there was a career in it. Thankfully she did, but it’s a reminder of the fact that girls playing hockey often don’t have an assumed hope of career success. As someone who grew up knowing women played hockey at the Olympics because of women like her, that’s kind of chilling.

That’s about it! It’s been a slow week for us, between the upcoming All-Star Game, moving our servers, and my own health issues. Take care and don’t get phished, kids.

#CWHLASG14 now a free, ticketed event. Fans who already RSVP’d received an email today. Follow the link to get your reserved seats.

Fans – @cwhl_insider working with @MapleLeafs to fix ticketing kinks. If you RSVP’d we have tickets for you, despite the hinky link. #fixing — CWHL Insider (@cwhl_insider) December 3, 2014

First off, CJ of Power Play with CJ did an interview with Knight–

Dewar’s, the scotch company, appear to have picked up Knight as one of the faces of their brand, and as such put out a profile of her– she mostly talks about her work with the Olympic team and her various charity work, but still pretty interesting.

Finally, looks like Knight’s selling some neat t-shirts and signed posters of her– check it out over at blixknight.com. 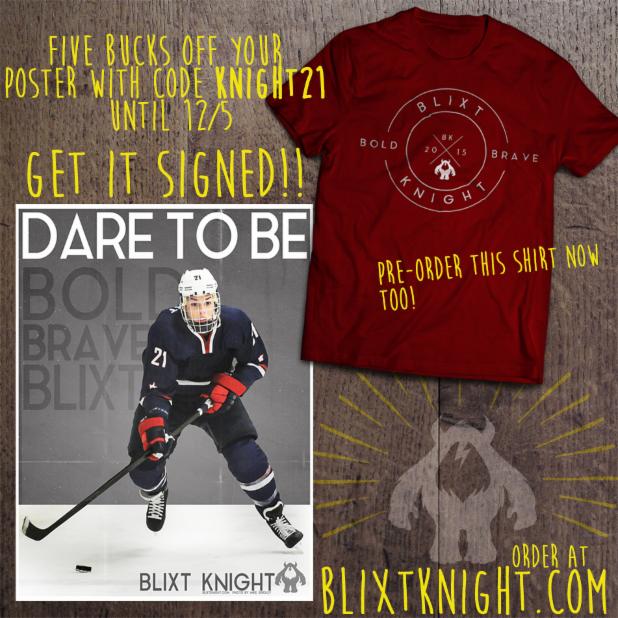 First off, we’ve heard from a couple different sources including the CWHL that the “player eligibility issues” (as the league put it) have been resolved, and Boston will play this upcoming weekend! Notably, the league also said that the All Stars Game would proceed as scheduled, which is great to hear.

If you bought tickets for the canceled games, email the CWHL about getting a refund. If you’re a Boston Blades season ticket holder, you’ll get a gift certificate; if you bought single game tickets, a direct refund.

We don’t have a ton else for links this week– Most of us here at Watch This are Americans, and are getting ready for the Thanksgiving holiday. Expect some pretty normal content from us the rest of the week though– we should have another piece from Elena, and hopefully our first piece from Cait of Women’s Hockey News, as well as the normal weekend game previews.

If you’re American, we at Watch This Hockey hope you have a happy Thanksgiving, and if you’re not, we hope you enjoy the coming weekend of hockey!